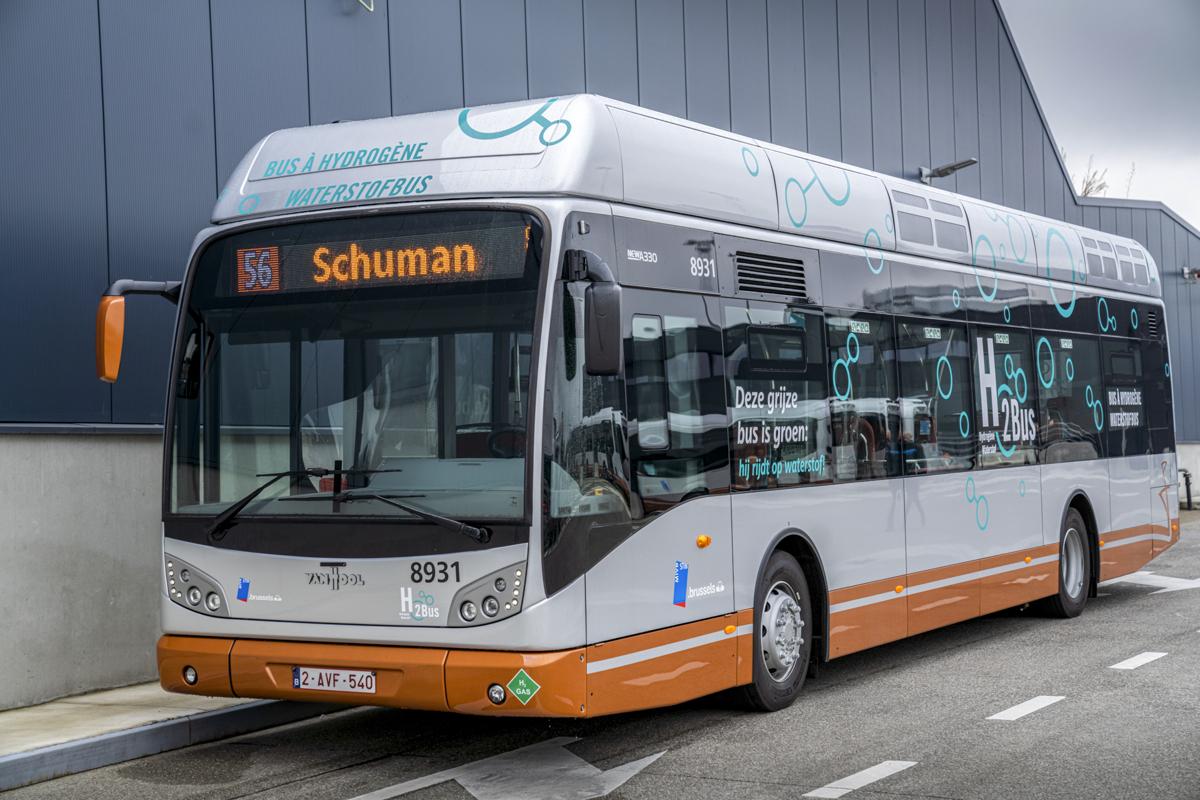 Koningshooikt – Van Hool, the independent Belgian bus, coach and industrial vehicle manufacturer has delivered a hydrogen bus (model A330FC) to STIB-MIVB in Brussels. STIB-MIVB (the public transport company responsible for bus, metro and tram transport in Brussels) wants to test the vehicle over a two year period on as many bus lines as possible, so they can thoroughly analyse its performance in different weather conditions (summer/winter) and various topographies on the Brussels network.

Filip Van Hool, CEO at Van Hool, was delighted with the unveiling of the new hydrogen bus at STIB-MIVB: “It’simportant for Van Hool as a Belgian company to be able to deliver this hydrogen bus to STIB-MIVB in Brussels, our capital and Europe’s capital. It’s our calling card to other customers all around the world. Since 2005, when Van Hool introduced the first hydrogen bus in North America, we have been convinced that hydrogen is an efficient and eco-friendly fuel for public transport. We now have Van Hool hydrogen buses operating in almost every country in Western Europe and North America, and the interest in hydrogen zero emission public transport rises exponentially in our neighbouring countries. Here at Van Hool we are making every effort to work closely with STIB-MIVB on this comprehensive and detailed research project. As part of this, training and education of the STIB-MIVB employees by the Van Hool Academy and a proficient aftersales service are essential to the success of this project. We are doing everything we can to help realise STIB-MIVB's strategic vision for an eco-friendly and efficient public transport system in Brussels.”

Brieuc de Meeûs, CEO at STIB-MIVB, explained: “STIB-MIVB is committed to making its fleet increasingly eco-friendly, in line with the ambitions of the Brussels Capital Region. That is why we have spent several months studying hydrogen technology as an alternative power source for our buses. The test that is being launched will enable us to learn more about the vehicle itself, its fueling and the day-to-day management during operations. That way, we will be able to determine whether hydrogen can be an option for the buses of the future.”

The 12-metre long hydrogen bus is a hybrid vehicle (fuel cell and battery) of the Van Hool A330 model with two axles and three entry/exit doors. The bus is designed for 25 seated and 48 standing passengers, with space for one wheelchair user and a pram. The vehicle is equipped with an FCvelocity-HD85 Fuel Cell module from Ballard Power Systems of Vancouver, Canada, and fitted with a 210 kW Siemens PEM electric traction motor.

Van Hool has been building hydrogen buses for the North American market since 2005, and for the European market since 2007. The company has so far produced 162 hydrogen buses for North America (21) and Europe (141). Thanks to the hybrid power source, the bus, with a tank capacity of 38,2 kg of hydrogen, will be able to carry out a full day's schedule of potentially 350 km.

Together with the traction battery and the electric engine, the fuel cell forms the basis of the power source, which is fully electric. Hydrogen is converted to electricity in the fuel cell, with water vapour as its only emission, while the battery provides additional power wherever and whenever it is needed. Thanks to this hybrid power source and the re-use of braking energy, only around 8 kg of hydrogen are consumed over a distance of 100 km.

Van Hool is an independent Belgian bus, coach and industrial vehicle manufacturer. The company, which was founded in 1947, is based in Koningshooikt. The vast majority of units produced are destined for Europe and North America. Van Hool has around 3,500 staff worldwide, the majority of whom work at the production facilities in Koningshooikt (Belgium) and Skopje (North Macedonia).