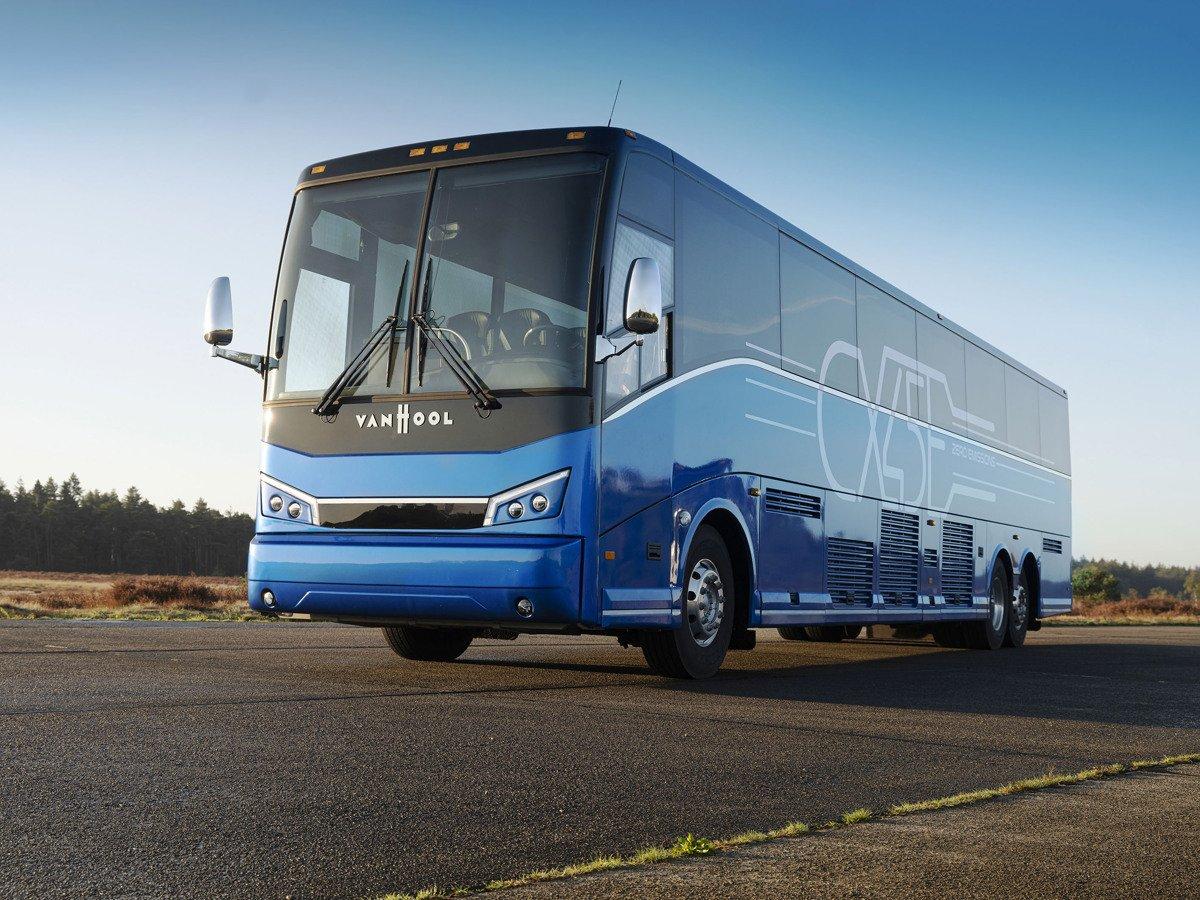 Koningshooikt, Belgium – Van Hool, an independent Belgian manufacturer of buses, coaches and industrial vehicles, has shipped the first CX45E, a 100% battery electric coach, to the US. After an intense period of development and testing, the CX45E is now being commercially launched by Van Hool’s North American exclusive distributor ABC Bus Companies Inc. An additional ten units will be shipped to the US in the first half of 2021. The all-electric CX45E will then be delivered to two North American customers.

The CX45E is a fully electric powered coach for the North American market. Proterra, a leading American producer of battery technology for heavy duty vehicles, was selected by Van Hool to supply the E2 battery technology. The 100% electrically driven vehicle has a range of up to 500km (310 miles), depending on the climate conditions and the route’s topography. The CX45E will mainly be used for commuting by groups of employees and/or regular passenger transport.

Filip Van Hool, CEO of Van Hool, explained: “With this announcement it all became a reality: a few years ago we put the first technical concepts of the CX45E on paper, and today the end-result leaves for the US. We were of course able to draw on our vast experience we have built up over decades in the design and production of electric buses. In 1985 we built the first trolley electric buses. In 2005 we were the first manufacturer to design a hydrogen-powered electric bus for the North American market, and the platform of our successful Exqui.City trambus can be equipped with different electric drivetrains. In total, more than 1,000 electrically powered vehicles have left Van Hool’s factory. And we will continue our efforts to market environmentally friendly and cost-efficient electric vehicles in the future, both in Europe and in our second home market North America.”

Filip Van Hool, CEO of Van Hool, adds: “Though not as prominent as in North America, in Europe too we see growing interest in a European version of the electric coach. With the experience gained in developing the CX45E, we firmly believe we are ready to quickly deliver a solution for customers who are looking for such a product, if European interest becomes more pronounced.”

“The cooperation between Van Hool and its distributor in the North American market, ABC Bus Companies Inc., began 33 years ago,” says Filip Van Hool. “After all these years of hard work, together we have managed to put Van Hool on the map in America. Today there are more than 11,000 Van Hool coaches and buses on US roads serving many customers, including a number of large Silicon Valley companies that organise shuttles for their employees. As there was demand from several customers for fully electrically powered vehicles, we at Van Hool and ABC Bus Companies Inc., looked for a solution. Van Hool is excited and proud to work with Proterra, a pioneering company in the development and production of battery technology.”

The CX45E was designed, developed and prototyped at the parent company in Koningshooikt, Belgium. The production-ready versions of the ten CX45E coaches planned for the first half of 2021 will also come from the Belgian factory. The vehicles will be driven from Koningshooikt to Zeebrugge for shipment to the US.

Van Hool is an independent Belgian bus, coach and industrial vehicle manufacturer. The company, which was founded in 1947, is based in Koningshooikt. The vast majority of units produced are destined for Europe and the US. Van Hool has around 4,100 staff worldwide, the majority of whom work at the production facilities in Koningshooikt (Belgium) and Skopje (North Macedonia).